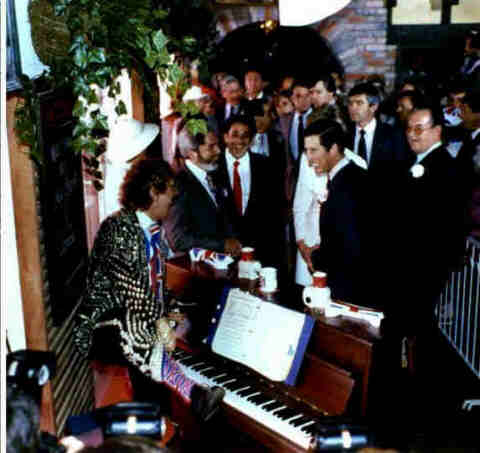 The Prince and I
At the British Pavilion I wore a custom-made Union Jack tie and red, white and blue socks with my pearly suit. "I like your tie" said H.R.H. "I had it made to match my socks", says I. "Bet it matches your shorts too", quipped the prince. Contrary to his media image, he has a great sense of humour. Prince Charles and Princess Diana opened the British Pavilion at Expo'86 and that's where I was lucky enough to meet him across the piano. Princess Diana is standing behind him in this picture (click here to see Diana) She was rather quiet and later on, in another pavilion, she fainted thereby depriving Toronto of the chance to see this scene which was, I was promised, slated for the front page of the Toronto Sun. However this picture did appear in Canadian Living Magazine, and is used by permission.

I was the featured entertainer in the British Pavilion for the full six months of this World's Fair, playing piano and conducting a noisy sing along in the Elephant & Castle, a beautiful reproduction of a London Pub built right into the Pavilion. 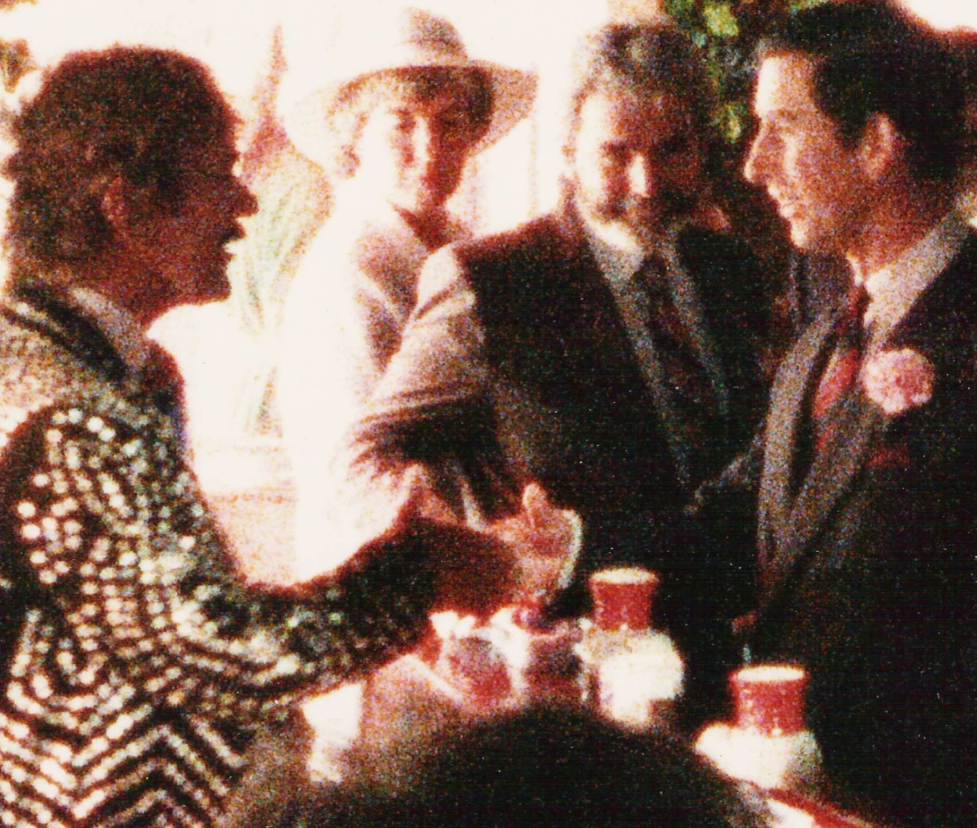 Photo by Canadian Living Magazine
In addition to the Prince and Princess, visitors to the pub included Canada's Finance Minister Michael Wilson, Princess Margaret, Prime Minister Margaret Thatcher and the captain and crew of the Concorde. Finance Minister Wilson came two days in a row and danced the "Knees-up" with Vicky, the Pearly Queen, both times. He was hatching the GST tax at the time and if we'd known that she would have stepped on his toes.

Jeffrey and Peter Barnett, twin brothers from London, built this beautiful pub and hired me to perform in it. Thanks, fellers. Vicky and I were sad to see it go when, at the end of Expo'86, all the buildings were torn down.

A link to Prince Charles web site is on my exit page. I doubt HRH has provided a link back to mine so please use your 'back' button.

All pictures on this website are unretouched, unedited. Photo by Johnny Vallis