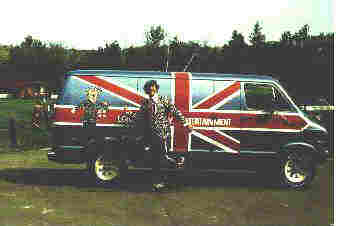 The Union Jack Van
1978, I just got the van organised in Toronto with a three-year lease and I landed a three-year booking in Hawaii. While I was away my kids enjoyed the van in Toronto.

The van was a good travelling billboard, parked outside some of the places I appeared at in Toronto during my breaks from Hawaii. Toronto was good to me, I worked at the Barmaid's Arms, Silver Rail, Fanny Hill, Chez Moi, La Pentola and many of the prestigious private clubs including the Granite Club, Thornhill Golf Club and the RCYC. This picture was taken at Clevelands House in Muskoka, Ontario where I worked every summer for about ten years.
Gallery tour: Next picture Previous picture Email: bob@londonbobby.com Page design by Hugh Robert Smith, © 1998 London Bobby Entertainment